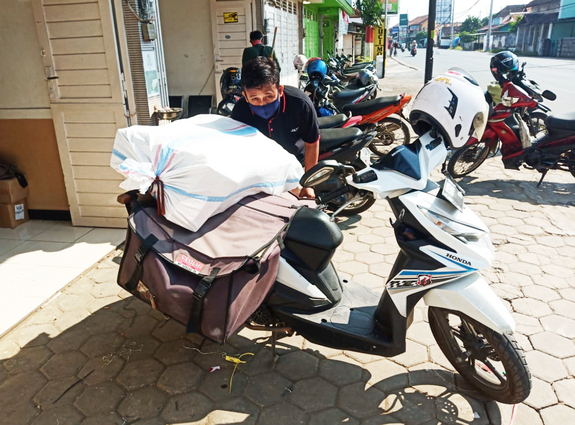 Atho Irrohman (30), a sprinter for the drop point area of Kedungwuni - Central Java, is never tired of picking up and delivering packages to customers. Joining J&T Express since 2015, Atho has never complained in his job even though he works late at night and has traveled for 5-6 hours to deliver packages to their destination. For him it is a responsibility to the customer that motivates him to work without complaining.

"When I was still at the drop point in Pekalongan, I was still in the early year when I arrived. I had deliveries to mountains, landslides and usually walked, couldn't ride a motorbike," said Atho, sharing his experience when asked about the most difficult things he faced in the field. Despite facing various challenges in the field including working late into the night, Atho is happy to be working as a sprinter because he prefers work in the field. His superiors also admitted that Atho's performance was very good, always working voluntarily without knowing time and distance.

Atho admits that he has gained many things since his career as a sprinter. He began to learn and know about online businesses which he previously did not understand. He is also interested in opening an online fashion business because of his previous work background in a convection business with his late parents. "Yes, I am interested in trying, but at the moment I have hit on my time and my priorities as a sprinter," said the man who was born in 1990.

For 5 years joining J&T Express, Atho was able to fulfill his needs as the backbone of the family, he admitted that for the first 4 years he was able to provide medical expenses for his late mother. Currently, he can save his income by buying a motorized vehicle for personal use as well as his job as a sprinter.